February 7, 2017 | Comments Off on Felicie May Phillippe
Categories: Felicie Philippe, Longfields, and Philanthropy.

It was March 1954 when a house in West Cross was bought for the Association. This house was called Longfields and was to remain the organisation’s home until it closed in 2011. Mrs Felice Philippe, a benefactor from London bought the house for £5,000 and gave it as a gift to the Association. She has been described in the press as ‘Lady Bountiful’ or as a ‘Fairy Godmother’. It is said that she learnt about Longfields from a newspaper article. 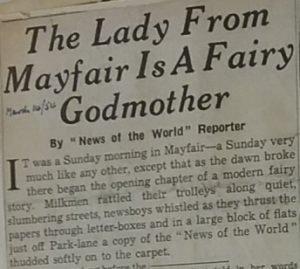 Let this extract transport you back to the 1950s where the News of the World is delivered to Mrs Philippe’s luxury apartment. A change of fortune is about to happen for a small organisation in Swansea!

An article written in NSS News in April 1954 reports Mrs Philippe as saying:

I had been looking for a long time for an avenue in which I could do something worthwhile. Whatever people might think, philanthropy is the hardest thing in the world to carry out; we are not meant to live just carrying on our business day after day.

I had not been to Wales before. It was pouring when I arrived but I was well received and at a meeting I had the opportunity of listening to and absorbing all the various things being done. There was a terrific spirit of excellent teamwork. 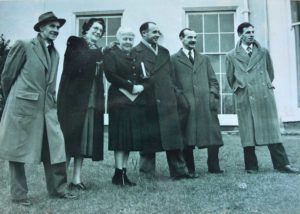 Mrs. Philippe outside “Longfields” with officials and committee members.

Mrs Philippe is pictured (third from the left) outside Longfields House at West Cross with members of the Association. NSS News in April 1954 reports how she drove ambulances in both world wars and was one of the first women to go overseas on a troopship in 1939 with the Mechanised Transport Corps. Her father was from Luxembourg and she inherited property from him.

It has been said that one of the conditions of her donating the house to the organisation was that she could live in the upstairs flat when she came to Swansea. As far as I know this may have happened for a few years. However, apparently there was a dispute between her and the organisation after a few years. There is no definitive record of what this was about but it can be assumed that this arose at the time when the local authority took over the responsibility for educating the children who had attended the school at The Grove. Around this time the organisation also negotiated with Mrs Philippe to purchase her share of the house.